Borgerson's Arctic Meltdown paper has made the rounds recently. Naturally, this the 'net, so pretty much no one's on the same page. ;)

I found it remarkable that America has only one ice-breaking ship to its name -- the same number as China, which (a map reveals) is nowhere near any ice-bound waters.
-- the economist blog

While China certainly doesn't have Canadian sized ice issues, using a geographic map to prove the lack of ice coverage seems super smart. One might consult a sea temperature survey like say this one from February 11th, 2008. That white spec (on the high-res version) between China and Korea means ice. It's not much, but it shows that ice occurs off of China's coast. 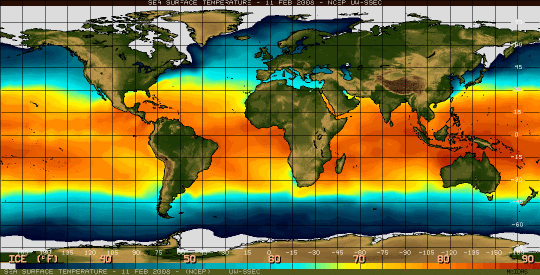 For grinz, I put together a video of the ice changes since November. All data came from U of Wisconsin - Madison.