Back in VT for the holidays, watching bowl games with the family caught me up with current advertising on TV.

Am I the only pervert in the world that thinks the new Taco Bell ad "Bowling with Carmen Electra" means that he's going to be putting his fingers in something else other than a bowling ball that night? I mean, Carmen in a skirt, Average Guy making the two finger salute, and Girl Pal saying "How's she going to bowl in that dress?". It seems pretty over-the-top to me, but maybe I've just got my mind in the gutter more than usual.

But then again, it's not like it hasn't been in advertising before.... 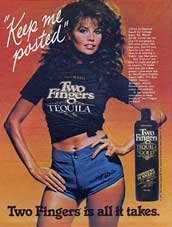 I asked my dad what he thought, but he didn't catch the innuendo. So maybe I've just got an overactive imagination. What do you guys think?

I saw the commercial...and as much as my mind usually twists things, I honestly didn't read that from the commercial. However, to be fair, I wasn't paying attention. - Nathan