When you buy a car in Singapore, there's an additional levy called the Certificate of Entitlement (COE) which must be paid every 10 years. The COE rate resets from month to month depending on the gov't allowed quota of new cars and the number of cars being purchased.

The rate can vary wildly: November 2008 (when global finance markets were tanking) had a rate of 2 SGD, while October 2011 = 56,000 SGD. Were COEs transferable, would we see a less variable market?

From Graphs of COE data, witness the November crater: 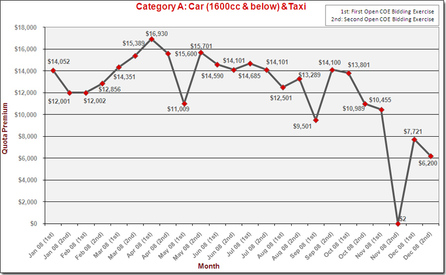