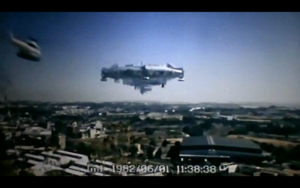 Aliens, BFGs, Sequelae; using standard sci-fi components, District 9 satires our response to aliens arriving as a pastiche of UN actions. As a dark mirror to Bosnia, Rwanda, and Somalia, you leave the theater not with a sense of wonder about the future, but with the jaded certainty that tomorrow will just bring another 24 hours of suck.

Countering this bleakness, some might say that the flower in final scenes signifies hope. Perhaps. But then again, one character's hope is another character's self-delusion. If Bosnia, Rwanda, and Somalia only needed one good person to take a stand, where were you or I? Our defensive belief in this flower power has played an enabling role in each and every one of our failures.