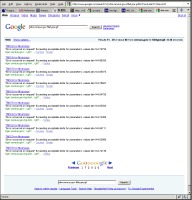 It seems that Google brute forced the US Census Bureau's graph generation servers to try to map the world. That didn't work out so well.

Word is that Google will adapt their request rate down as servers' response times increase, so they probably didn't destroy servers so much as probably cause massive error log spew at the Census Bureau. Regardless, the USCB probably didn't have those bad links on their site, so Google's next_link_to_follow() would seem to have some smartness about figuring what queries it can make of a cgi script.

So, can one be crafty with CGI links on one's site to figure out what googlebot understands?