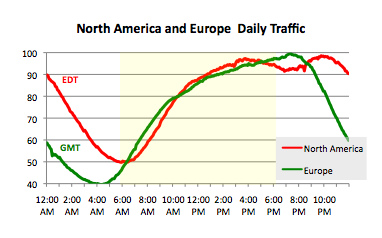 Arbor Networks just posted about EU and US aggregate internet usage by time of day. They feel that this chart shows that North Americans don't internet over dinner. Maybe....

It also could be that US work commutes take longer than EU ones, so usage drops temporarily. Since NAs would get home later than EUs, NAs would stay online later to get the same amount of Internet as EUs, which would explain the extended usage.

I'd like to see a version that adjusts for local time instead of one representative time zone for each continent. I bet there wouldn't be as much of a difference at night. --Rehana
True, 3 time zones instead of 4 looks good. Especially when weighted by population (coasts vs middle america and more evenly populated EU). -- Patrick