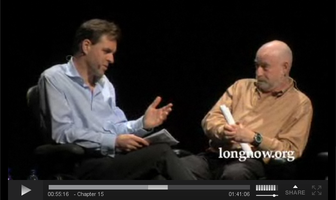 Niall Ferguson and Peter Schwartz debate their professions and writings as part of a Long Now Foundation event. While fun to watch from the high-school argument perspective, I would rather have seen more time allocated towards trying to construct a workable future. I mean, it's fine to officiate a public mind-share pissing-match, I just expected more from something called the "long now" foundation.

At one point in the talk, they discuss the 2008 global financial meltdown. Schwartz indicates the ur-cause lies in the "one more hit of heroin and then I'll quit" mentality on Wall ST. I think he's on the right trail: in order to get massive Fails, the majority of participants need to have individual incentives that (while short-term profitable) ultimately ruin it for everyone.

So, despite an evolution in rules (which Schwartz should have rested his argument on, instead of being led to technology by Ferguson) by which we organize ourselves, we still encounter Tragedies of the Commons. My question to the two of them would have been why? Is it merely due to short-term profit-seeking?

Imagine that you live in a slightly pessimistic future where the prices of essential foods gets spiky (like in SoylentGreenShouldBePoliticians ) and you have a choice between living in a world where:

Which would you choose?
Your choices reduce to: 1. Only one state exists 2. Several states exist I would like to think that the efficiency advantages of multiple states would outweigh the stability advantages of a single one, but that judgement would have to be made with more information. -- Theo
Theoretically, public goods like security should be natural monopolies, where we see gains from scale, so multiple states would seem inefficient.
That is what I was talking about when I said "stability advantages". However, internally all corporations/states tend towards entropy over time. A multiple state configuration allows for the possibility of creative destruction. Which may serve to raise the efficiency average of the system over that of the single state over the long-haul. -- Theo
Perhaps I'm misled by terms. You mean multiple states, each with an army? In times of resource constriction, those armies will probably be used to acquire resources. War destroys the beneficial in addition to the obsolete targeted by creative destruction, enough so that War does not clearly improve our world. Or do you mean multiple states with one separate Global Army to conform them? We would not see inter-state war, perhaps we would see uprisings quelled, perhaps we would see a world enslaved. Fun questions, no? --Patrick
A state is a corporation which secures its own assets via force of arms. I don't know of any better definition. As far as resource constriction, I don't see how that plays into it. Entities fight each other when it is profitable to do so - when they think they can win and when winning is better than not fighting - or in self-defense. In the age of nuclear weapons, overt, open war between states strikes me as inherently unprofitable until someone comes up with a viable defense. As for self-defense, I just don't see countries starting wars when their standard of living decreases (equivalent to resources becoming more scarce). --Theo
Ok, so say that it's not resource constraints, I'm presuming we'll see more war with multiple states relative to a unified global police. Given that, you'd still choose a higher probability of war to a higher probability of global enslavement? --Patrick
Possibly. Over the short to medium run, certainly. If you look at the China and Japan (who weren't entirely isolated, but isolated enough to make good examples) before European colonization, they weren't without external threat (I think the Chinese were conquered by the Koreans (Manchu) and Mongols and the Japanese were threatened by the Mongols), but most of the death was due to internal conflict - points where the state had weakened sufficiently to where a challenger could effectively make a bid for power. There is also an additional worry. As far as I know (and I'm certainly not a history buff), modern times are unique as the power of the state military is such that factions within the state can keep 'pets' safely - small quasi-states they can use against their political enemies by hobbling the effectiveness of the state infrastructure in combating them. Most commonly they are known as gangs. The results are the burned out husks of major cities. Lastly, in order for a system with multiple states to be somewhat stable, they need to be largely equally powerful. If there are significant power disparities, the system becomes unstable over the long run and turns into a single state system. If the system is largely stable, it is possible that war would become increasingly symbolic, as it did in Europe for a period of time (with the evolution of 'the law of war', etc.) In summary: multiple states tend to have continuous war, but a single state suffers the downside of increasing entropy as well - which also means an increasing risk of system-wide failure resulting in war. As there is little to extrapolate from, and this is entirely hypothetical anyhow, it is mostly impossible to discern which system would be 'better', however you measure it. --Theo
As a quick aside, when I say "most of the death", I completely realize that the rate of death back then was much higher than it is now due in part to disease, accidents, personal combat over honor/crime. I consider these to be endemic threats to life - effectively combated only through the slow growth of wealth across society (people's enthusiasm for dueling or personal combat seems to be largely linked to the ambient level of wealth), as opposed to organizational combat which states can and should suppress.
This seems like an intergenerational transfer problem. Like it may make sense for me to vote for a Global Police, knowing that I'll probably die before it enslaves the planet. However, I may have just condemned those born after me to an uphill battle for freedom. ;)