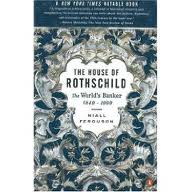 Ferguson continues his history of the Rothschilds (from TheHouseOfRothschild), although the last hundred pages are spent tying the modern state to public finances. He also loosely correlates increases in defense expenditures to increased odds of war; this might provide a distant early warning of a country's destabilization.

the decision to acquire control over the European mercury market was partly a response to the risks of governmental default. By controlling a tangible asset like the Almaden mines, then the world's biggest, the Rothschilds could finance the Spanish goerment with minimal risk, advancing money against consignments of mercury. The involvement in mercury mining made sense doubly because of the use of mercury in silver refining. Already experienced bullion brokers before 1815, the Rothschilds branched into minting too....
capital gains on continental railway shares in the course of the nineteenth century were the principal reason the French house subsequently outgrew the English. By the middle of the century, the Rothschilds were already well on the way to building a highly profitable pan-European railway network.
-- Preface

'The venerable Madame Rothschild, of Frankfort, now fast approaching to her hundredth year, being a little indisposed last week, remonstrated in a friendly way with her physician on the inefficiency of his prescriptions. "Que voulez-vous Madame?", said he, "unfortunately we cannot make you younger." "You mistake, doctor" ... "I do not ask you to make me younger. It is older I desire to become!"
-- Charlotte's Dream (1849-1858)

By the end of 1858 ... the challenge posed to the Rothschilds' position not only within France, but right across the European continent, had been quashed. This had largely been possible because, while the Pereires' resources remained fundamentally Parisian, the Rothschilds were an authentic multinational, with a business empire which expanded during the 1850s as far afield as the new goldfields of California and Australia. The Rothschilds' superior resources made it possible for them to reimpose their dominance over European public finance in the period of the Crimean War....
Before 1859 the Rothschilds had been fortunate in one signal respect; they had lent to the winning side in the Crimean War, not to the loser.
-- The Era of Mobility (1849-1858)

The Rothschilds had tried to stop the war of 1866; they had failed. The costs of this failure for Austria were high: contrary to the expectations of most contemporaries -- the Rothschilds included -- she and her German allies were decisively defeated by Prussia in the field, a defeat which counted for infinitely more than the Austrian victories over Italy...
Moreover, the ramifications of the battle of Koeniggraetz seemed and were immense: "Casca il mondo," said the papal nuncio, and with reason, Bismarck's alliance of Prussian conservatism with democracy, kleindeutsch Liberalism, Italian nationalism and even the Hungarian revolution truly turned the world upside down.
-- Blood and Silver (1863-1867)

A Democratic form of Government has an unfortunate way of spending more money every year, & fresh sources of revenue have to be found, until & unless the various peoples of the earth, weary of the load they have to carry, agree to a millenium & a general disarmament: that however is a long way off, and under the circumstances one will have to work harder to meet the increased charges.
-- Lord Rothschild, 1906, The Military-Financial Complex (1906-1914)

Prior to around 1890, the cost of empire-building had been relatively low. Expeditions like the one sent to Egypt by Gladstone in 1882 had been run on a shoestring. The military budgets of the great powers were not much higher in the early 1890s than they had been in the early 1870s. As table 13a shows, that changed in the two decades before 1914. Taking Britain, France and Russia together, total military expenditure (expressed in sterling terms) increased by 57 per cent. For Germany and Austria together, the increase was even higher -- around 160 per cent...
The problem of how to pay for rising military costs ws compounded by the rising cost of government as a whole. At both the national and local level -- as well as at the regional level in federal systems like the German and Austrian -- the 1890s saw the end of the "nightwatchman state" era, which had been characterized in most European countries by a contraction in the size of the state relative to the economy.
-- The Military-Financial Complex (1906-1914)