The austerity measures in Europe seem to have percolated throughout the world, reducing world trade volume. Global consumer goods firms have recently stated that the future looks ungood for a while (Unilever discussing its 2011 results).

Perhaps due to this contraction in global aggregate demand, the FAO food price index continues to fall from its 2011 all-time highs. Lower inflation will be welcome to savers who currently watching their bank savings depreciate at 3% a year ( 3% US year-over-year all urban consumer goods - 0.0tiny bank deposit rates ).

Global liquidity appears to be returning as the TED spread has fallen from its recent highs. 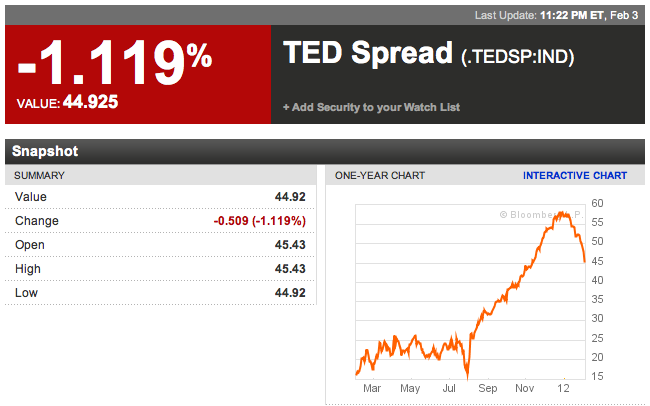 In the US, the bank industry has been in a continual consolidation since the early 1980's.

This is likely to continue apace as the recent crisis has not yet resulted in any material changes affecting banking's economies of scale. With more future mergers and acquisitions, the more aggressive mid-sized banks and global banks will continue to grow.

Granted, we have yet to see how the Fed will unwind its bank reserves balances, so one should view US banks as a decade-level or longer investment. Likewise, continued weakness in GDP growth may incite Congress to enact knee-jerk regulations.

For January, TTF beat out the S&P500 by a few tens of basis points, and continued to outpace the index.