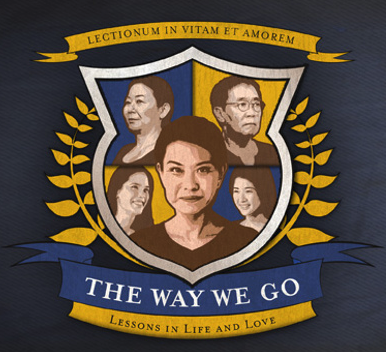 The Way We Go written by Joel Tan, directed by Claire Wong for Checkpoint Theatre

The official description misleads a bit, this play celebrates love like Sparta celebrates a Persian emissary.

Each love is timid and doomed to die, cast aside by the very people who summoned it. Attempts to heal love's wounds and resuscitate it are futile because the character died or the play ended.

The central character has cancer, though all the other characters could be said to have cancers of the soul: either they refuse to see what is in front of them, or they bicker with it. The victim's story unfolds achronologically, which is a wise choice, as this intersperses the relentless downspiral with moments of relative levity.

The set design is equally inspired, as the stage is divided into 15 same-color squares, five of which are false and actually 6" deep holes covered with stretchy fabric. The characters have varying levels of trust and each navigates the stage with something between trepidation and blithe abandon.

On a final more appropriately scholastic note, these misanthropic tendencies mean that the "lectionum in vitam et amorem" probably should have been translated as "in vitam et amorem disciplina", or perhaps "documen" depending on your reading of the play's dynamics.

Update: 2014-12-01
Upon reflection, this play can be viewed as an indictment of the same-sex local secondary institutions, i.e. the places where emotionally crippled adults turn bright young kids into completely non-productive members of society.